‘The Moral Grandeur of Fleeing to Canada’: Masculinity and the Gender Politics of American Draft Dodgers during the Vietnam War.” In Masculine Histories in the Making: Emerging Themes in Canada. Eds. Peter Gossage and Robert Rutherdale. Vancouver: UBC Press, 2018.

“Time, Age, Myth: Toward a History of the Sixties.” Co-authored with Dominque Clément. In Debating Dissent: The Sixties in Canada. Edited with Gregory Kealey and Dominique Clément. Toronto: University of Toronto Press, 2012.

“‘We Who Have Wallowed in the Mud of Flanders’: First World War Veterans, Unemployment, and the Development of Social Welfare in Canada, 1929-1939.” Journal of the Canadian Historical Association New Series, Vol. 11 (2000), 125-149. Reprinted in Interpreting Canada’s Past: After Confederation, ed J.M. Bumstead. Toronto: Oxford University Press, 2004: 337-50, and in Readings in Canadian History: Post Confederation, eds. R. Douglas Smith and Donald B. Smith. Thomson-Nelson, 2006. Download PDF 1.3MB 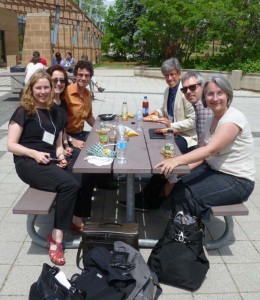 Relaxing at the Canadian Historical Association, University of Waterloo

“‘I Stay at Home Myself’: Family Economies, Gender, and the Family Courts in the Great Depression.” Society for the History of Children and Youth, University of British Columbia, July 2015

‘I’d just as soon go back to the U.S. shooting”: The Politics of Amnesty in the Vietnam War, Canadian Historical Association, June 2015.

“‘We Will All Come Out Fighting’: Masculinity and War Resistance in the Vietnam War.”
Canadian Historical Association, June 2012.

“Dodging the Demands of Citizenship: Masculinity and Draft-Dodging during the Vietnam War.” Berkshire Conference of Women’s History. June 2011.

“Our Own Merchants of Death: Canadian Nationalism and the Vietnam War.” British Association of Canadian Studies, April 2011.

“‘The ‘Moral Grandeur of Fleeing to Canada’: Masculinity and Draft Resistance during the Vietnam Era.” Two Days of Canada Conference, Brock University, 2010.

“‘Libertine Liberationists’: Gender and Sexuality in Canadian and American Draft Resistance during the Vietnam War.” Western Association of Women’s Historians, May 2007.

“‘If he is a man he becomes desperate’: Husbands, Fathers, and Unemployment in the Great Depression.” Canadian Historical Association, 2004.

Editorial Board, Women and Social Movements in the United States, 1600-2000. Current.

National Capital Committee on the Scholarship, Preservation and Dissemination of Women’s History, Marion Dewar Prize, 2011 [Awarded to an outstanding scholar based on record of research, teaching and administrative work]